What is Illuvium? Simply put, it is the future of Web3 gaming. Not only is it the first fully open-world exploration game, it is also the world’s first interoperable blockchain game (IBG). Illuvium takes many of the elements of some of the powerhouses of great sci-fi and fantasy to show players what a game can truly offer. 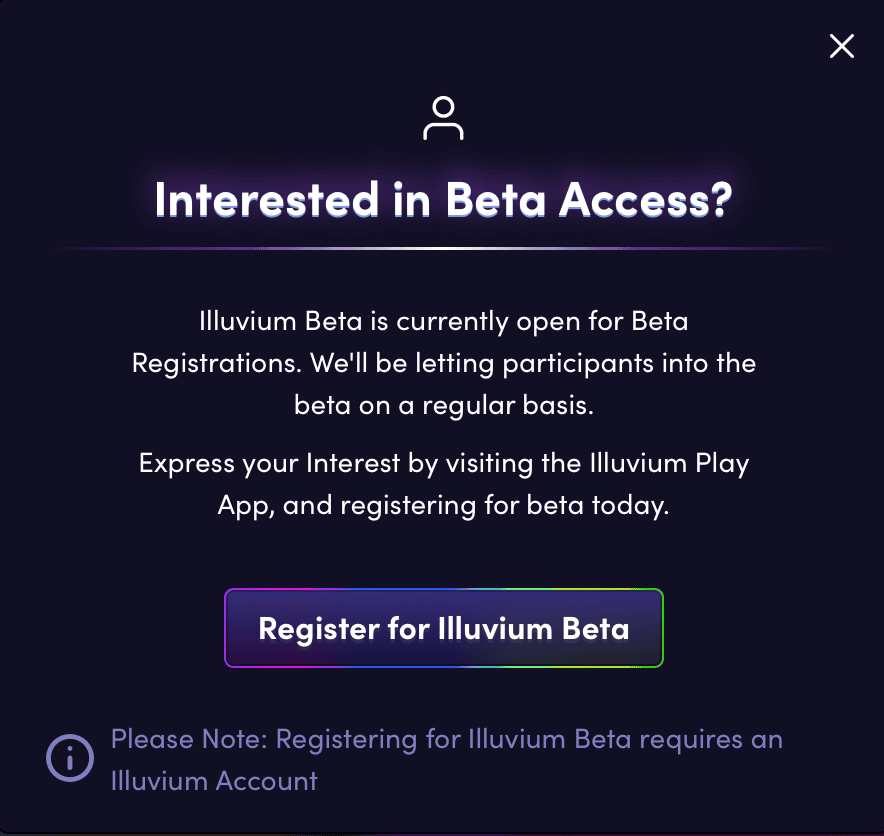 The trailer for the beta version of Illuvium shows that it is a role-playing game with a futuristic theme. Players explore alien landscapes to collect and develop “Illuvials”, the local wildlife on this planet. As it is now, there’s not much to do in terms of exploring these landscapes, but the full release should provide a seemingly endless terrain on multiple continents. Battle mode is up and running with limited choices, and later should be equally full of variations of Illuvials to personalize and trade.

In Illuvium Beta you start out as Arlen, a woman in a spacesuit who looks eerily similar to Samus Aran from Metroid. Why is she on this planet? She crashed. And no, she wasn’t piloting the vessel. Arlen was a crewmember aboard a transport vessel that was “investigating a perplexing distress beacon” (according to Illuvium’s whitepaper). She discovers a ruined planet, which could possibly be the “mythical cradle of [her] race’s civilization.” Sigourney Weaver might disagree. 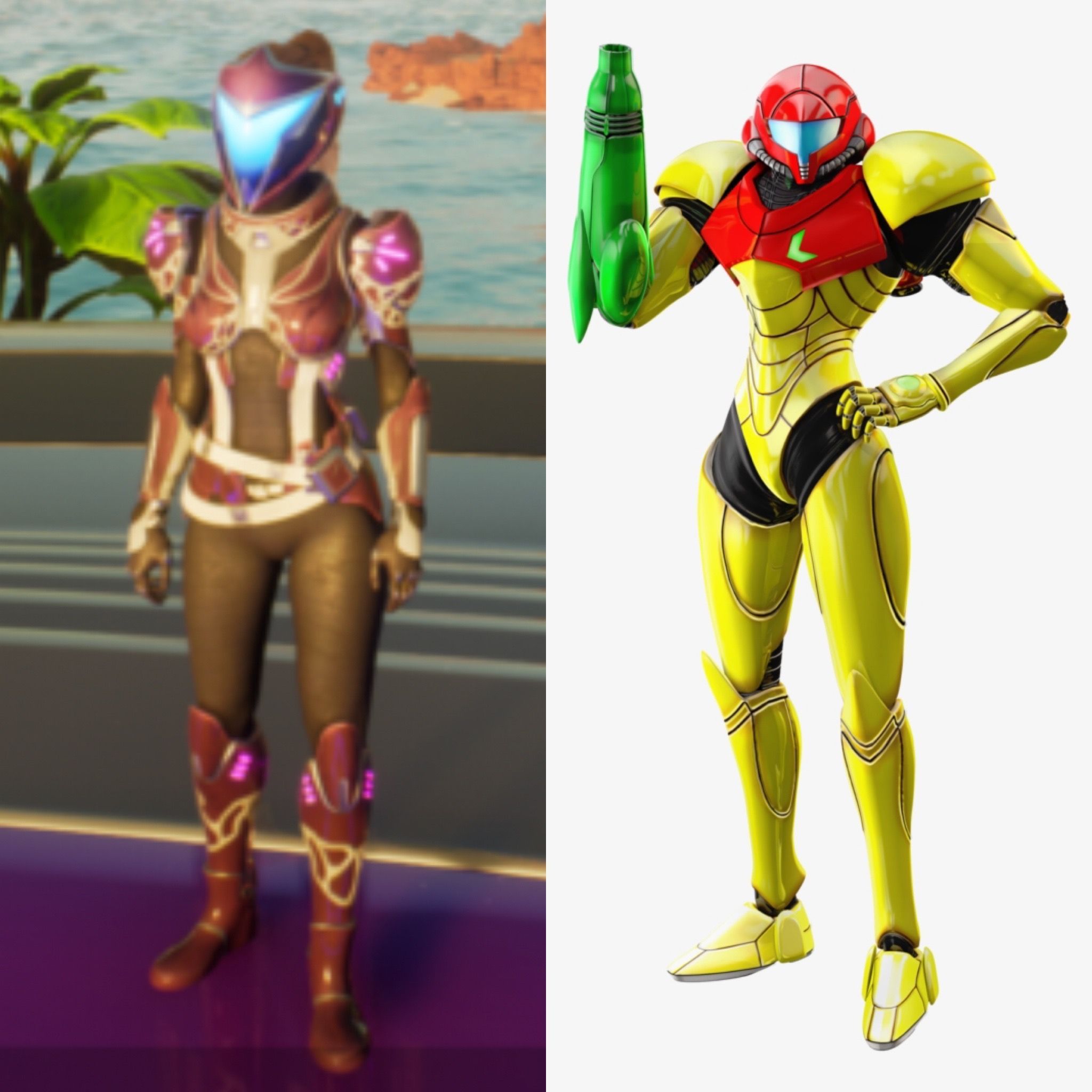 As you explore the seven various landscapes of Illuvium, you quickly discover that it is inhabited by seemingly magical creatures called Pokémons—I mean Illuvials. They don’t want to have anything to do with you, because you’re a scary alien, so you have to capture them. That’s what crash victims do. To capture them, however, you need to mine items called Shards. Stronger shards can get you stronger Illuvials.

But why do you need these Illuvials? For battle. Imagine for a moment that the roles are reversed. Aliens crash on Earth, kidnap humans, and force us to battle one another so the aliens can bet on the odds. This is just a game though, so it’s a fun premise.

The more you explore, mine and collect on Illuvium, the stronger your team gets. Once you get ‘em all, or at least as many as you think you need, you can autobattle other players for supremacy and dominance. In turn, the more you win, the more money you can earn by trading your NFTs. Yes, this is also a collectible card game, and of course there’s a marketplace. The game is built on the Ethereum blockchain. 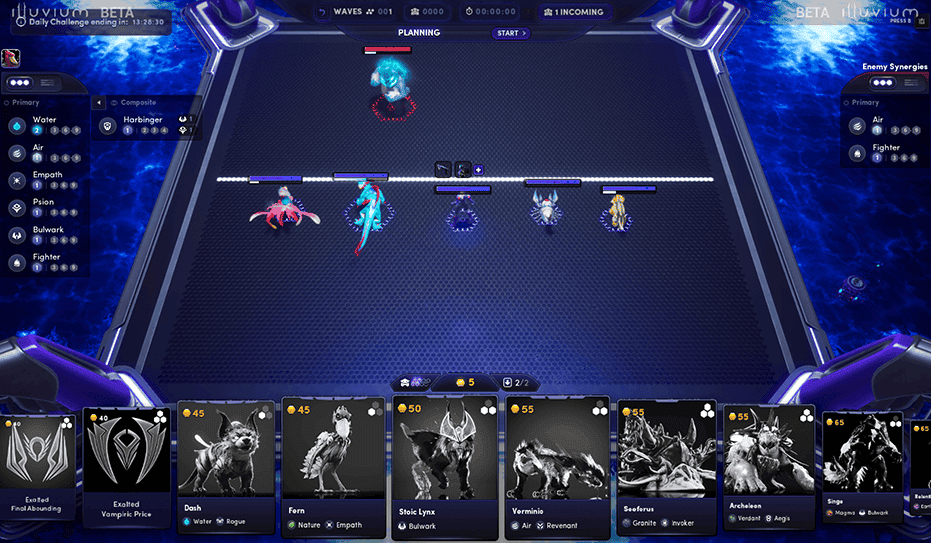 Getting Started in Illuvium

Considering that this is a review for Illuvium Beta, getting started is slightly unusual. We contacted the developers directly, and they provided us with a free log-in key. We’re not special though, as it seems basically anyone can do exactly what we did.

Once you’re registered (it only took a day or two for them to reply), you just need to free up some space on your hard drive. For now at least, Illuvium isn’t available to play via browser. The game is a whopping 9 Gb in size, however, so while it’s downloading be sure to check out some tutorials. You’ll need them. You’ll also need to install Rosetta for the game to run on Macs.

Connecting your wallet is another issue. As mentioned, to download the game you need to visit Illuvium’s website. Once you’re in the game, however, you won’t be able to connect your wallet, or at least I couldn’t find any options to do this. I had to leave the game, revisit the website, and connect that way. I use MetaMask so that part, once I found it, was rather easy.

We mentioned that you’ll need tutorials before playing Illuvium. Why? Because there aren’t any in Illuvium itself. The devs should really consider having at least something that tells players what to do, and how, for example moving your character. When you’re in the Overworld—that’s the exploration part of the game—you can navigate using standard WASD keys or arrows on your keyboard, or a mouse. I had to learn the hard way that the space key is for jumping, looking around is via the trackpad, and shooting is holding on the trackpad. 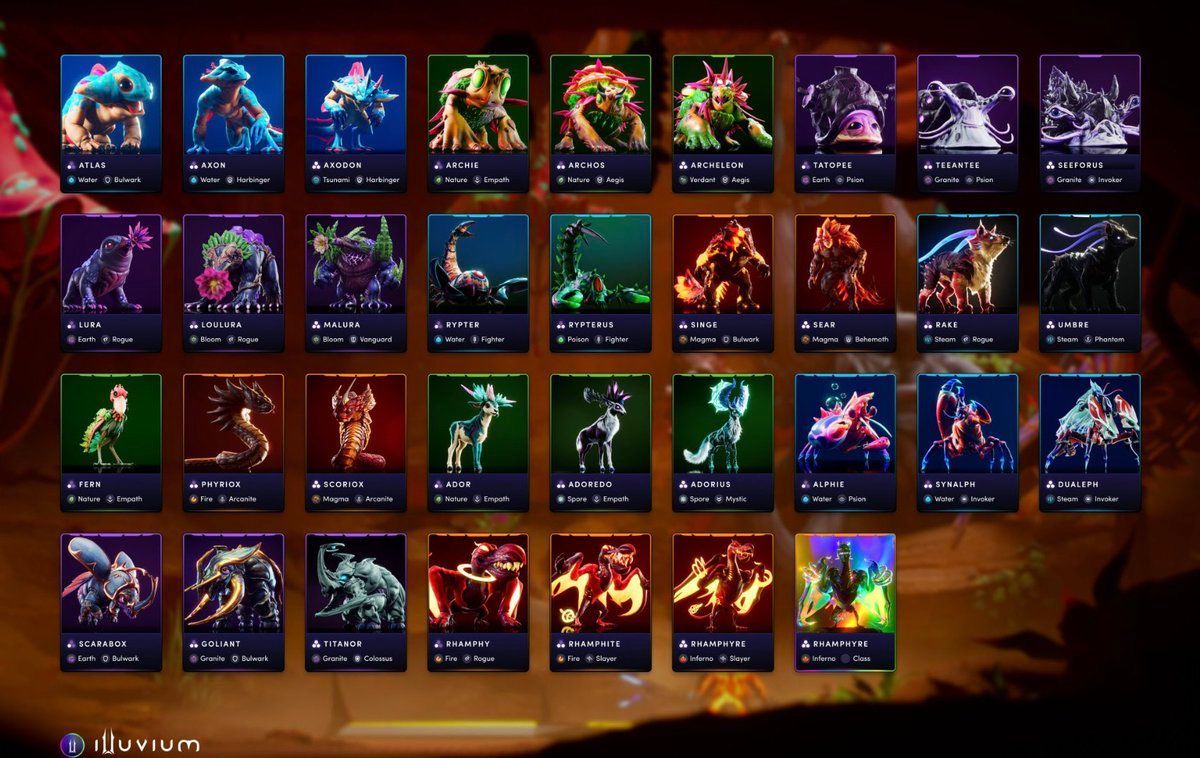 In the beta version you can go straight to Illuvium’s Arena mode, where there is a training option, which isn’t too difficult to figure out. In fact I’d say it’s rather self-explanatory. Still, a little bit of help would be appreciated. You can certainly go to their Discord and ask, but in my opinion, you shouldn’t have to. However, the devs themselves remind you when you open the game for the first time that it’s a beta version, there will be lots of changes to come, and they have made it very easy to provide feedback and suggestions in-game. 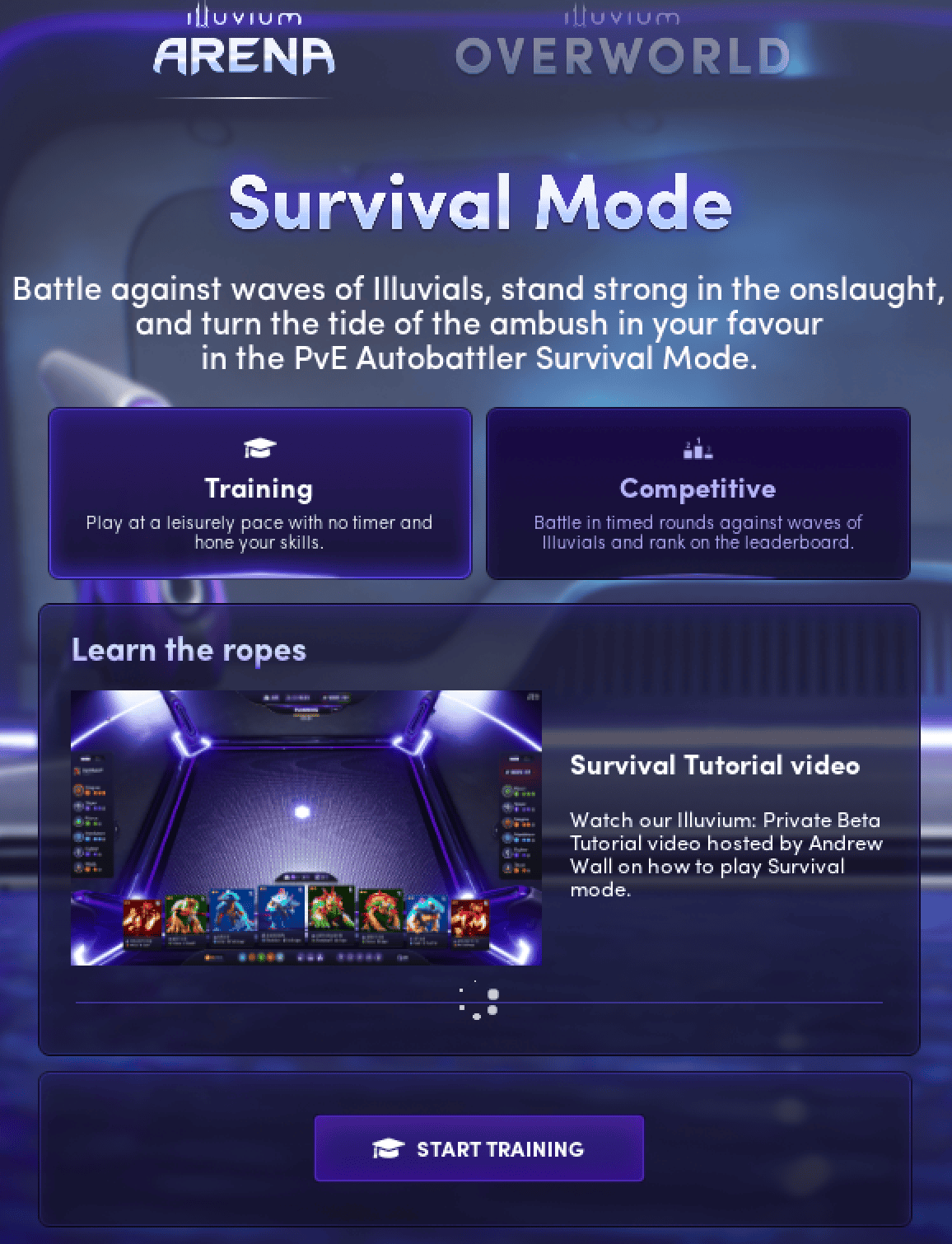 Well, almost. The option is there, but I couldn’t access it at first. Illuvium Beta is so insanely graphics-intensive that in Overworld mode I couldn’t do much at all. Lagging was substantial, and a few options simply wouldn’t register when I eventually managed to get the cursor to land on it. After hooking up an external graphics card to my 2020 MacBook Air with an Apple M1 chip, I didn’t have any problems.

That’s when I could truly appreciate what is so far available in the Overworld part of the game. The landscapes are pure eye candy, as are the sound effects ear candy. The music, on the other hand, tends to be so relaxing that perhaps the developers could consider adding a spa option. I have no doubt players and Arlen alike would enjoy that. But as for now, you can easily content yourself by spending hours just moving Arlen around the surface of the planet, enjoying her self-recharging jetpack as it launches you through the air for short bursts. And this is just the beta version of Illuvium. 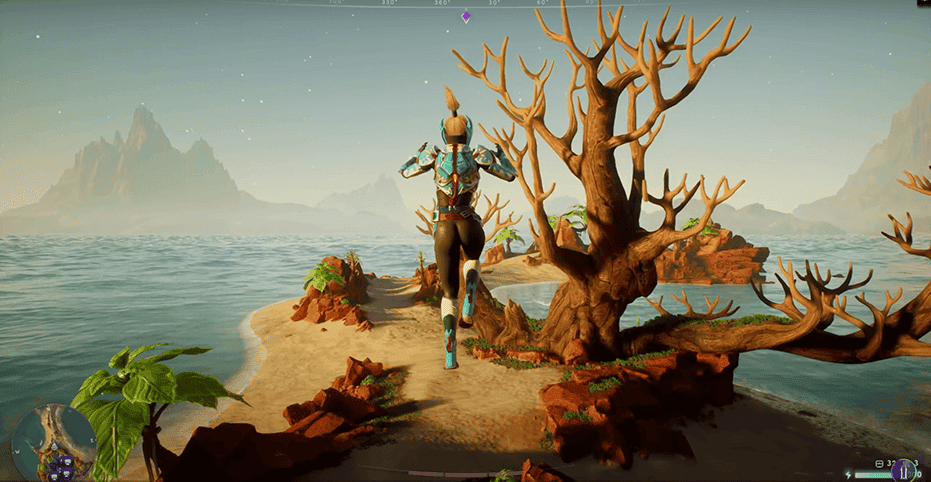 As you spend more time in the Overworld, you’ll develop a keen desire to hunt for more resources and Illuvials. Throughout this part of the game, you’ll be able to access obelisks for teleporting to other realms, as well as a forge for equipment, and your own personal storage locker. There are also numerous battle arenas where you can put the indigenous life to the ultimate test.

Winning battles scores you points, which you’ll be able to instantly use to upgrade your team members. The upgrade categories are rather interesting, as you can see in the following image. Or you can save your rewards to invest them in something even greater than the incremental upgrades. 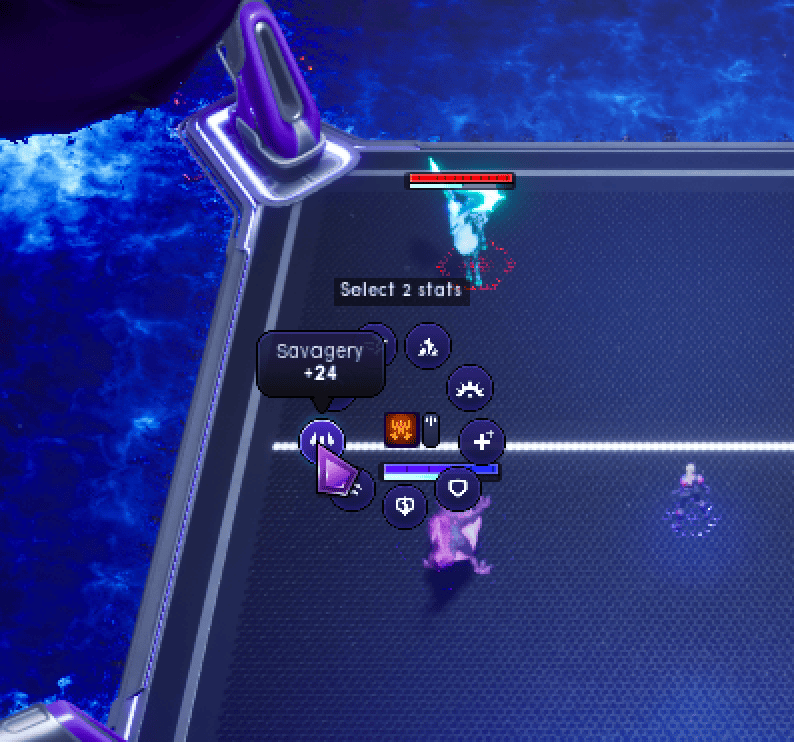 As this is an autobattle format, there’s not much to do in terms of actual fighting. For future releases, the devs could def consider a manual battle option.

If you’re able to become a landowner in Illuvium, then you’ll be able to access the Illuvium: Zero part of the game. This is where you can access and develop your “digital industrial complex” to reap even more rewards, such as fuel and resources. The description is a bit misleading, however, as it says you can use what you produce here in “other video games”. It’s misleading because the “other video games” are in fact the Overworld and Arena, both parts of Illuvium. This part is free to play, but you will have to connect your wallet to reap what you so desperately need to enjoy the entire game.

As an open-world game, Illuvium will even satisfy many of the more traditional die-hard console gamers. The NFT features of the game should likewise satisfy Web3 enthusiasts. Illuvium will be an excellent pairing of the two.

Assuming the final version of Illuvium has addressed all the issues that currently exist in the beta version, this is going to be one hell of a game. I can confidently predict that this is the future of Web3 gaming. The story incorporates some of the greatest aspects of sci-fi and fantasy, while providing enjoyable and addictive gameplay with near-infinite variations available.

Illuvium is an open-world exploration, monster-collecting, and autobattle game.